The idea to do a full marathon had been in my bucket list for many years. When I had been working for 5 years after university I tried my first ballot for London Marathon (2007). I was unsuccessful in the ballot but managed to get a fine adidas running jacket. After many years of Triathlon I never motivated in doing the long distances until I completed my first half marathon. The experience motivated me towards trying to get London Entry and another failed Ballot and even the club ballot ended in me choosing the wrong soin of the coin. So my first ever marathon at the end of an Ironman and that got me thinking that I could achieve the good for age time for London Marathon. So to achieve this goal I entered the race then checked with the wife if she fancied a weekend in Brighton.

I knew immediately what my goal was – I wanted sub-3 hours, this was based on my half-marathon PB (1:18). I could live with missing my target, but not if the secondary goal of GFA for VLM(3:05) was not achieved.

I was provided some very good advise from Coaches at FVS and my training buddies. Some quotes that helped with my strategy

“Just remember for Brighton, I always say you can take seconds off at start of races to add lots of minutes on at the end. ” Simon Jackson

“Don’t let the adrenaline fool you, discipline yourself the first few miles and then smash miles 10-20. ” Andew Patterson (coach @ FVS)

My build up to the race was to slowly build the training miles up from my longest run of 10miles (Sept 2014) to 20miles (Mar 2015). This was with my usual tempo and interval runs and IM training plan provided my Russ Cox. The build up included some half marathons and my test race was at Oakley 20 and I knew I was ready to race. However, my injury prior to the race caused some concern but as ever my Physio Kieran Feetham got me to the start line and I can’t even remember my knee hurting post race.

The new addition to my plan was removing alcohol and watching my diet in general. My justification was that racing without drinking could add benefits not only on race day but during my training cycles. I simply figured that carrying any excess weight for 26.2 miles was not going to help.

To monitor my progress I often refer to the Training Peaks Performance Chart as this is a good indication of my running form.

I was finally ready to race and Saturday was the planned trip to the expo center and pickup my race number. We booked in Crowne Plaza London Gatwick hotel that is actually based in Crawley. I weighed up being in Brighton versus travelling on train, however, In hindsight my choice was excellent as the hotel was in proximity of Three Bridges train stop and trains ran every half an hour. This obviously did’t stop me panicking post race as we got stuck on the M25.

My pre-race strategy was to run the race at 6:45 m/m and at mile 20 push if I had anything left. My nutrition strategy was to take a gel every 5 miles as this would be around 35 mins per gel. I used water at most stations to ensure I was hydrated during the race. My pre race purchase was a flip belt (I actually challenged them to see if they’d award a prize for the first racer home in a belt) as I experienced issued with my traithlon belt and gels during training runs. Although untested this felt comfortable when around my waist and didn’t move during the race, I’d love to see an Ironman Race Distance belt. I would rate this belt 10/10.

On race day I was up early okay for me(6am). Breakfast was what I always have before a race – a cup of coffee, followed by 2 pieces of toast and a yogurt. I had entered on a Good-for-Age HM time, and was lucky enough to have a place at the Elite start.  The facilities have a small area and exclusive portaloo for the International Elite. For the rest of the runners we had exclusive use of a large marquee and around 10 Portaloos  (130+ runners I would guess). The lorry to take the kit needed to be packed by 9am and I put on my kit bag. I kept my long top to keep warm and decided to remove before the race started and asked a helper to put in a rubbish (maybe a waste but I suffer in the cold). We are asked to line up at the start at 9:10, but leave 10 metres for the International runners to take their place on the line.

At 9:15 we are off! The Elite start at Brighton, has a few benefits one is that no congestion exists except around the 3hr pacer (he had a lot of friends) and it’s downhill until the two packs merge (Elite and Main Race). The race has great crowds and you can feel the energy as you run through banks of people  on either side of the road. You come into Brighton on York Place and the crowds in the town are amazing.  My first mile is completed in around 6:40 and I’m on the pace set. This continues around the town until I get into mile 6 until we head to Ovingdean. The route is a gradual incline maybe around 4-5% and a group of 4-5 runners form. I tend to run on the front until 2 other runners come and help keep the pace. At each water station I ensure I grab a cup and take a few sips of water. The weather has been much kinder than forecast with a little wind and nice bright sunshine.  For the first half I’m feeling pretty comfortable, but as we head downhill into the city centre we can hear the commentators but that was the last thing on my mind as I started to experience some nasty stomach cramps. I asked the helpers for the next location of the portaloo but nobody had the information I desperately needed. I finally found a loo on my third attempt after being sent up the incorrect side of the toilets. To my annoyance the first 2 were closed but to my releief the third was available. The experience cost me a minute in time and maybe a change in my pace as I tried to catch runners around me.

I hit the half-way point at around 87 minutes. The next few miles are another out-and-back through residential streets and for me this was an enjoyable section with lots of enthusistic supporter. Many local residents had music playing and a makeshift band was playing some tunes. I ran with another club runner and we were running around 6:45 m/m. However, when we hit mile 20 I got a little tired and for me the most unenjoyable section of the course as it goes into a industrial docks and strong smells of fish make my tummy turn. The section is also not very well supported and I understand why Saucony have the 23 mile films to help motivate runner. This was very motivational as my daughter Beca made a film (Catrin made a film for her medium friend – Gareth). At mile 23/24 my pace was dropping at around 6:55 m/m and I felt my hamstring and calfs cramping.

Then disaster the 3hr pace maker caught me in mile 25. I was caught by surprise and thought no dig in otherwise the time will simply disapear. I dug deep and followed the pacer as he motivated the 4 runners around him. My plan was to leave 2 x 7:30 m/m for miles 25/26. The reaction was to increase my pace but then I started to cramp badly so I started to do walk/run technique for 50m. This eased the cramping and I continued to get back to a pace that felt controlled. This unfortunate timing then forced me to consider were my calculations incorrect. When I glanced at my watch and on mile 24 I had around 2:43:something. So best case scenario is 17 minutes to run 2.2 miles. I left the pacer go and thought if my maths and watch are correct I can achieve my target time. The crowds are getting noiser as we head towards the end. Many are shouting “nearly there”, “go go you can do this!” and more importantly “you can get sub 3 hrs”. Finally the 400m to go, I can see the line but can’t read the clock as I get closer is it saying 2:58 or 2:59 something am I too late ! The commentator is geeing the crowd as the runners still can achieve 3-hours, I muster a final sprint down the finishing straight. I look up I can see the finish line and the clock and can only explain my emotion as uncontrolled feeling of achieving something very special.

I head through the end congratulating the runners around me and get chatting to a runner from Flitwick who is also an Ironman. Its time to collect my medal and t-shirt, and head off to find my family as I say my goodbye.  The girls give a a big hug and my wife is proud of her husbands achievement (this can be translated to thank heaven I don’t have to listen to a moaning husband all the way home and for the next few weeks).  The final hours of the weekend are to support those to shared my journey to Brighton (Anna, Yvanne and Gareth).

Now to focus on my up and coming Ironman in Germany (European Championships).

Finally, a few post-race thought and some tips.

Many thanks to my family support team and my running club for those enjoyable training runs. 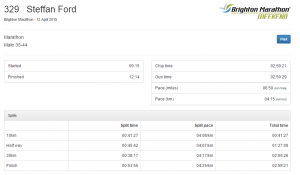